A Festival is a day or period of celebration in a year by a group of people to commemorate an event.

THE ORIGIN OF EWES

According to oral tradition, the Ewes migrated from ancient Egypt through to Ethiopia, Sudan, Nigeria and Benin and settled in Notsie in present day Togo.

The Ewe language is an international language. It is spoken in Ghana, Togo, Benin and parts of Nigeria, Germany. The Ewes are scatted along the volta rigion namely HO, Kpando, Anloga, Peki, Dzodze etc.  Anlo state is made up of 36 towns. These include Abor, Anyarko, Atsiavi, Agbozume, Keta, Veta among others.

ABOUT THE HOGBETSOTSO FESTIVAL

The Hogbetsotso festival is celebrated in Ghana by the people of Anlo in the southern part of Volta Region.

Hobgetsotso was derived from the word “Hogbe” meaning The Day of Exodus.

It is celebrated to mark the escape of the Ewes from the oppression of the wicked King Torgbui Agorkoli of Notsie in the 14th century.

All through the jurney of escape, they picked various forms of worship such as in Egypt, they worshiped the Sun god referred to as Sogbolisa, in Nigeria they practiced Afakaka (Soothsaying), and in Benin they practiced the Yewe cult. All these practices gave them some mystical powers hence the fearsome nature of the Ewes. These powers were mainly for good purposes. With these powers they could conjure rain, heal the sick and do many other wonders which are considered good for humanity.

THE PROGRAME FOR THE FESTIVAL

It is celebrated in the first week in November in Anloga which is the capital town of the Anlo state.

The Awormefia comes from either the Adzoviawo clan or the Bateawo clan. After the escape from Notsie, Torgbui Venya the leader of the Ewes asked his son to go back to Notsie for his stool. When his son refused, his nephew Sri went. As a result, the Kingship rotates between the nephew and son lineage of Torgbui Venya. The festival is preceded by a spiritual cleansing ritual called “Edupkorpklor“. This is done in July and it is led by the Awomefia the paramount chief of the Anlo State.

He is accompanied by some selected elders, clan leaders and priests. It is done in the night so a curfew is imposed. This is the only part of the entire festival where the Awormefia plays the leading role all other could be delegated if need be.

Later in the year, the people undertake an exercise known as Edord3d3 which is a form of General house and community cleaning by all in Anlo State. It involves the disposal of all items considered undesirable by individuals, clans and families. People hoot at these items as they are being disposed of as a sign of parting with bad omen (poverty, sickness just to mention a few).

The next activity is called Ewus3which is a ban on drumming or any form of noisemaking. Ewumeans a drum and S3 means a law. During this period, the GongGong is replaced by an empty bottle or a bamboo for announcements.  Empty paper cartons are used for drumming if the need arises. This period is for meditation and fellowship with the gods.

Two weeks to the actual celebration or the festival, various dance groups perform their dance and display their mystical powers every day. The dance forms are Kinka, Gatso, Agbadza etc.

In the final week before the festival, there is a mini-durbar organized by the youth. This is for education on very important issues and also addressing communal problems facing its citizens.

The Thursday has an important activity called Nugblidodo. This is a peace-making period in which all disputes are ended with the finding of amicable solution. It is believed that their ancestors lived in harmony with themselves all through their escape from Notsie and that it was this character that made their sojourn a success.

A  Special Libation is poured

There is an enactment of the escape of the Ewes from Notsie. This involves a backward movement dance to signify how the Ewes escaped from Notsie. The various dance groups also perform on this day, conjuring fish from a dry ground, stabbing themselves etc.

The festival attracts indigenes and tourist from far and near who come to identify with their heritage and also celebrate. Donations, pledges and commitments are made towards development of the society. This occasion bring together people who might not have seen each other for a long time and also give people the opportunity to know their origin and culture. 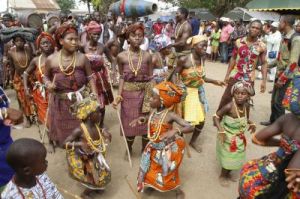 A cultural group performing a dance 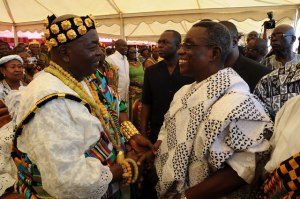 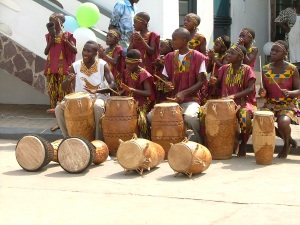